KONY 2012: An Anthropological Perspective (TO BE CONTINUED)

“Right now there are more people on Facebook than there were on the planet 200 years ago”-opening line of Kony 2012 film. 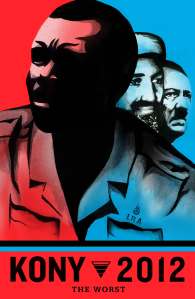 Unlike the Occupy movement and Arab Spring, Kony 2012 is a very intentionally designed grassroots movement. The foundation of this movement is Invisible Children‘s 30-minute long film telling the story of Joseph Kony and the Lords Resistance Army (LRA). The film is very moving, depicting the atrocities committed by Kony– primarily the kidnapping of nearly 30,000 children from Northern Uganda and East and Central Africa over nearly 26 years for use as child soldiers in the LRA. The Kony 2012 campaign is meant to be polemical, asking  viewers to “help make Kony famous”, to help push the movement forward and capture Kony “this year“, 2012.

Although the film explicitly references the Arab Spring movement, a stronger parallel might be to the Obama 2008 campaign. Indeed, that campaign’s model of a highly designed social movement mobilized via social media seems to be a direct inspiration for the Kony 2012 campaign. In the film, they even speak with artist Shepard Fairey, the designer of the famous HOPE poster for the Obama 2012 campaign. Shepard also communicates the video’s central message of individual empowerment:

“A lot of people feel powerless to communicate their ideas, they think that ‘I’m not a corporation, I don’t own my own magazine, news station, I just don’t have any say’ but seeing as what I’ve done, I think it’s empowered a lot of people to realise that one individual can make an impact. I mean I actually want to demystify and say ‘here are these really simple tools, go out…and rock it’ – Shepard Fairey

Part of the plan-of-action presented by the film asks viewers to purchase their $30 “action packs” (full of Kony 2012 posters, stickers, a t-shirt, button, and two bracelets), and to help raise awareness by “Covering the Night”, on April 20th 2012. This final portion of the film (starting around 25:00) plays a throbbing dubstep song and shows images of young teens plastering Kony 2012 posters to walls, mostly in the dark and backlit by firelight. It makes the whole thing seem pretty cool, fun, and dangerous. This is one of the points where  it becomes very clear that the main target audience of the 2012 campaign is youth- and primarily high school students.

While the Obama’08 campaign definitely targeted a “youth” audience, ultimately high school kids and younger cannot vote. Invisible Children are fascinating because their main tactic is to target high school and college kids, and get them involved in the issue and aware of their own political power and voice. Invisible Children started when 3 college grads went abroad to Uganda and witnessed the horror many Ugandan children were facing. This seems a key defining feature of the Kony 2012 movement; it is a movement BY and FOR youth. Many of the reports on the Kony 2012 phenomenon note that adults started to hear about it from their children. As the film’s producer Jason Russell states in an interview, “These are children and young people 25 and younger are saying, ‘Mom, Dad, we want you to pay attention to this right now.”’ 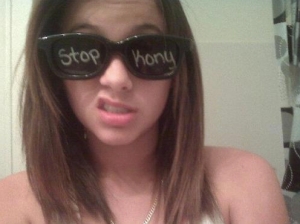 This key feature of the Kony 2012 movement as a youth-targeted campaign, I think is actually at the heart of a lot of the criticism and debate surrounding it. Some of the main complaints about the film has been that it is extremely flashy, extremely over-simplified, and that it seems to imply that the African people actually affected by Kony are powerless, and need to be “saved” by Americans. In an interview with Reuters, producer Russell explains that “it’s oversimplified for a reason”. In fact, Russell’s explanation seems to suggest that children’s naive moral understanding is being targeted by Invisible Children for a reason:“these are the children who have a very clear understanding … when you get older, you get muddled and polluted by the way the world is supposed to work”. And truly enough- it appears that many people are hesitant to ally themselves with the Kony 2012 movement, questioning whether the US ought to get involved in another foreign military conflict, whether Invisible Children are using the money from donations in the most responsible way possible, whether the whole thing is just another flash in the pan (or on the screen) and whether it will really change anything anyway.

These are all good questions, and even the people at Invisible Children encourage their audience to ask them…but ultimately the success of their movement depends on a willingness to act despite reservations, and to know that regardless of everything else, “Joseph Kony must be stopped.”- their movement depends on the moralistic simplicity and sense of political empowerment of the youth.

—TO BE CONTINUED. UP NEXT: Kony 2012 and the “Lana del Rey effect” (aka, snowballs and backlashes), and a consideration of the future of social media activism (slacktivism?). 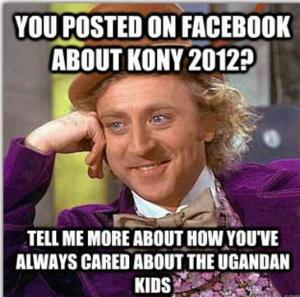 For some EXCELLENT reading about the Kony 2012 phenomenon, see the following links:

GOOD magazine: Joseph Kony and the Moral Ambiguity of the Modern World (“The best any of us can do is keep reading, keep talking to each other, keep trying to do the right thing, and keep hoping that there’s more than one way to destroy a warlord.”), and ‘There’s a Rabid Hunger to Criticize’: A ‘Kony 2012’ Creator Defends the Film

Teju Cole, Nigerian-American novelist, 7 Tweets on the Banality of Sentimentality

Sydney Morning Herald: “Jaded parents can learn from their teenagers’ idealism: We all lose if the ”Stop Kony” campaign is swamped by cynicism.”

Makerere Institute of Social Research, Kampala, Uganda: Senior Research Fellow Adam Branch on Invisible Children and Kony 2012 Campaign  (” it is the militarization we need to worry about, not Invisible Children.”)

Vice Magazine: Should I donate money to Kony 2012 or not?

View all posts by puellaludens

2 thoughts on “KONY 2012: An Anthropological Perspective (TO BE CONTINUED)”