In the lengthy and involved media spectacle surrounding the 2012 elections, the day of reckoning is of course voting day. Traditionally, media messaging switches from heated horse-race coverage to “neutral” coverage encouraging people to get out and vote, with live coverage of lines at polls and providing information on polling locations. This year witnessed an interesting new addition to the media’s “rock the vote” message, with individuals using social media to document themselves going through the voting process and encouraging others to do the same.

Youtube encouraged users to send in pictures and videos of them voting, Facebook placed a widget at the top of their page which allowed people to click an “I voted” button, and informed people in their news feed which of their friends had clicked the button. But the most noticeable practice this year was people taking pictures with their mobile phones either of their actual ballot displaying their vote, or proudly displaying “I voted” stickers, and uploading these pictures either to Facebook or the increasingly popular photo-sharing platform Instagram. This practice was so widespread that many traditional news outlets covered the phenomenon, in particular to emphasize the fact that in some states, it is actually illegal to photograph your ballot and it can possibly even be voided if if you do.

This year’s “Document the vote” phenomenon seems to be a natural extension of the practice of handing out “I voted” stickers at polling places to display proof of pride in oneself/the democratic process/one’s candidate/America, and to encourage others to vote as well. Social media allows that “sticker effect” to be amplified around the virtual world. 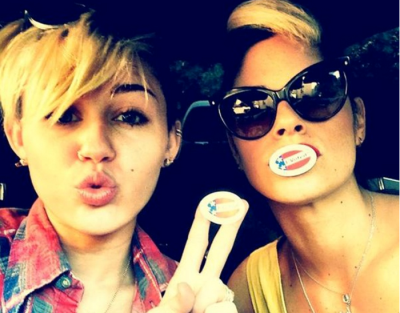 Miley Cyrus and friend displaying “I voted” stickers on Instagram

Looking closely at the practices of documentation across these different platforms, we can see how some of the important differences already discussed manifest themselves. On Twitter organizations and politicians encouraged others to vote, celebrities publicly documented their vote, and all the “little people” of the internet world helped to create a trending hashtag, #Ivoted.

These displays of civic engagement were all completely public; even those without Twitter accounts could see pictures of Beyonce posing with her ballot, either on her Twitter page or on the multitude of gossip blogs that circulated the image. This means that an incredibly wide audience was encouraged to vote on Twitter via their favorite sources of authority, be it the New York Times, their cousin, Ron Paul, or Miley Cyrus. 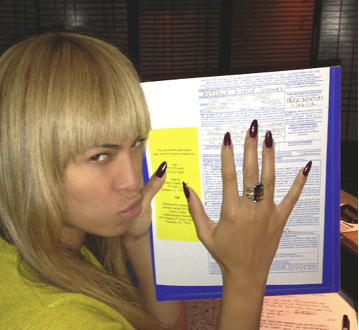 Beyonce poses with her ballot

On Facebook, the platform itself was encouraging people to vote via a widget appearing on the top of the Facebook home page. This widget encouraged people to look up their polling place on an app Facebook had created, or to click an “I Voted” button which would not only notify your friends of such, but also used these clicks to create a real-time map of the U.S. showing “blips” of where people were voting.

Of course, Facebook’s large network of strong social ties still are likely to have the strongest effect on voter mobilization. A recent study actually tested the relative effect of this social network on voter mobilization by randomly selecting a small percentage of Facebook users to be exposed only to the “informational” content, providing polling location info and a counter of Facebook users who had voted, but not showing them whom of their friends had voted, and selecting another small percentage to receive neither the information nor the social messages from Facebook. The study found that the group exposed to the informational and social messages were .39% more likely to vote (confirmed by public voting records) than both the group that received the informational message and the control group, suggesting that the real motivator was the social message. They also measured the “social contagion” effect on voting, with results suggesting that reports of voting by strong ties in the network generated an additional 282,000 validated votes compared to the control group. The authors of the study point out that even very small percentages of increased voter mobilization are potentially very important on Facebook, since their network includes tens of millions of potential voters. (Bond, 2012.)

These results reinforce the idea presented previously that political use of Facebook may not be very useful informationally speaking, but is powerful in its ability to encourage general engagement and awareness via strong social ties.

The newcomer to the “document the vote” scene this year was Instagram, a new app that caters to the ability of mobile phone users to visually document their lives and share these photos broadly with their social network or “followers”. Instagram also easily meshes with Facebook and Twitter, with some people choosing to automatically send images from Instagram to their other social networks.

Like Facebook, Instagram is generally oriented to the happenings of everyday life. However, it also takes on some of the qualities of Twitter. Since these pictures are often taken and uploaded by mobile, on-the-go users, they have an important “in the moment” quality about them, amplified by the concreteness of an image rather than a verbal description. In the case of documenting the vote, Instagram, even moreso than Facebook, makes the act of voting seem more pressing, immediate- it gives the viewer the feeling that “This is happening right now!” We can only theorize that this helps activate the notorious “FOMO”, or fear of missing out, a clear effect of social media use. This fear, amplified by the popularity of these Instagram documentations of voting, may help encourage users to get our and vote.

Apart from amplifying the social expectation to vote, it is possible that Instagram and other social media platforms amplify the potential social rewards for voting. This tweet by Glee star Darren Criss, retweeted over 5,000 times, may suggest that the chance for public documentation may in fact be a big motivating factor:

Social media, in many ways, can be seen as a sort of expansion of the sphere of ethical feedback. Although the Internet is notorious for allowing “flaming”, bullying, and other irresponsible actions to be taken under the guise of anonymity, social media seems to have the opposite effect, putting people’s actions and behaviors under sometimes all-too-public scrutiny. But this can be an elective practice as well, providing an opportunity for individuals to display their ethical activities for public approval. In these days, when people seem increasingly inclined to think that their vote doesn’t matter anyway, this potential for social reward can be an important motivator.

The general practice if self-documentation and blogging can in some ways be seen as a kind of democratic practice. Narcissistic, but also essentially build on cultural notions of the importance of the individual and their voice. The narcissism of inane self-representation via new media can be seen as related to the kind of narcissism that encourages one to think that their vote, their opinion is important and will have an effect on the course of the nation as a whole.

This cultivation of practices of potentially narcissistic self-representation via new media (of which “document the vote” is a part) can be read as either positives or negatives for the cultivation of democratic engagement. The “slacktivism” model would suggest that new media creates this sense of self-importance and the need to voice one’s opinion, but it also satiates it, as a kind of closed loop that encourages more tweeting and more blogging but may never encourage actual political engagement. However, we can also imagine that this sense of self-importance, of self-efficacy, could have the potential to encourage people to make their voice heard by actual voices of authority and power. One might imagine that many of those who participated in the Occupy movement were students who had voted  for Obama in 2008, felt that the election of their candidate signalled that their voices were really being heard, and were disillusioned with the lack of “change” that actually came about from this vote. It is also possible that both of these scenarios are real consequences of growing practices of new media self-representation.

Although it is not currently possible to know all the motivations and effects of the “Document the vote” phenomenon in 2012, we can be sure that it reflects a growing practice of self-representation and documentation via the tools of new and mobile media, which can sometimes cross over into the land of “citizen journalism”. In this case, it also seems evident that this practice helped encourage and mobilize potential voters to take concrete political action. It is still unclear whether this same kind of practice would be as effective for more difficult or politically charged mobilizations.

One thought on “#Ivoted: Documenting the Vote in the 2012 Elections”

Error: Twitter did not respond. Please wait a few minutes and refresh this page.