Instagram is a social, mobile photography app. They have 100 million monthly active users, and 40 million Instagram photos are posted per day. Purchased by the leviathan of social media that is Facebook in 2012, Instagram seems to be some kind of “big deal”.

From a commercial perspective, Instagram is an immensely easy-t0-use and popular social platform, and its default setting of making all images open the public makes it eminently available for market research (for example: I can search the tag “#target” and tap into what people are thinking and reacting to about Target and their stores). Instagram is also an excellent medium for brands and celebrities to communicate directly and intimately with their fans. Images are in many ways the language of the commercial world, and Instagram is a platform catered directly to that language.

Above and beyond the “market value” of Instagram, it is also changing the meaning and practice of photography at every level, from high art to the “laymen’s” snapshots of the Eiffel Tower and cute toddlers.

Perhaps the most explicit difference between Instagram and other platforms is its unique time-frame. Instagram is not merely a photo-sharing app, but actually contains a camera within the app. The tool emphasizes instantaneity (obviously) and a mimimum amount of time between taking and sharing the photo.

In this  way, Instagram takes on a quality (similar to the practice of Tweeting) of inherent presentness. It is a token of the “this-now”,  a visual status-update of sorts. This quality is emphasized by the common picture tag “#latergram”, used to indicate photos taken sometime in the past (typically more than a day). As was insightfully pointed out on PBS’s Idea Channel, this hashtag is particularly odd if we consider that every photograph is in some sense a “latergram”, removed from the actual moment represented in the photo, and that for most of history the point of photography was to preserve a record or image for later consumption. Yet it is true that Instagramography  has a kind of flat temporality that previous forms of photography don’t. The photos tend to be taken and instantly shared, often times with the photograph being taken expressly for the purpose of Instagramming, without any period of latency or consideration of the photograph. After being shared, this photograph is consumed fairly quickly, disappearing in a flow of new images within a day.

Another example of the temporality of Instagram is the hashtag #tbt, or “Throw Back Thursday”, a day where many users post heavily nostalgic pictures from years past. In a very literal sense, Instagram has only really been popular for a few years, so Instagram does not typically allow for a kind of nostalgic reminiscing in the same way old photo albums- even ones on Facebook- do. #TBT is the exception that proves the rule in this case.

Apart from these exceptions, Instagram photos tend to occupy two temporalities: the Here and Now, and the Atemporal Abstraction. Interestingly, Instagram actually quite literally addresses the HERE in here and now; although timestamping of images is universal, Instagram photos all contain a location-stamp, which Instagram uses to create “Photo maps”, or maps showing SPECIFICALLY where a photo was posted. Additionally, users may add their own location tag (“MoMA”), specifying which restaurant or business they are at, or utilize a hashtag (#playoffs) to meta-label attendance at an event.

An event like Hurricane Sandy is an excellent example of the unique practice and meaning of Instagramography. The storm was a huge event that nearly all residents of NYC and the East Coast in some sense “participated” in, and furthermore was the kind of thing your dad would have tried to get some Polaroids of back in 1975, as a kind of momento of the time a hurricane hit New York. In 2012, people turned to their iPhones to capture these bizarre momentos of the flooding of NYC streets and the loss of power in Times Square– and also to communally share and consume these images via social media platforms. Rather than about the preservation of an image, this practice was about the communal participation in and consumption of the Here and Now.

Apart from this kind of Instagram, there is also the Atemporal Abstraction- the photograph that does not really represent a specific time or place- although perhaps an experience, or an image. This images are more purely aesthetic, or “artistic” rather than documentary. The banal version of this might be the Manicure-photograph, or the funny picture of a cat- the more artistic version of this might be the close-up picture of beads of dew on grass, perhaps through one of Instagram’s artsy filters.

These images gain their social capital not by being linked to a time and place, but rather the opposite; they represent something more widely accessible, based purely on aesthetic choice. I would argue that this phenomenon in Instagramography represents a shift in laymen-photographic practice. This is again partially due to changes in the technology. Whereas in an earlier era it may have made sense to go to the Louvre and take a picture of the Mona Lisa, this no longer makes sense in a world where you can simply Google an image of the Mona Lisa, and access the same kind of “memory”, probably through a much higher-quality photograph. For myself personally, Instagram and iPhone-ography makes me feel this sense of photographic nihilism even in my everyday life. How banal is a photograph of a sunset, or the New York City skyline, even if it is incredibly beautiful to me here and now? Instead, I find myself (and I often see others as well) looking for beauty in more unsuspecting places, or appropriating and participating in the image to make it more aesthetically “valuable”. 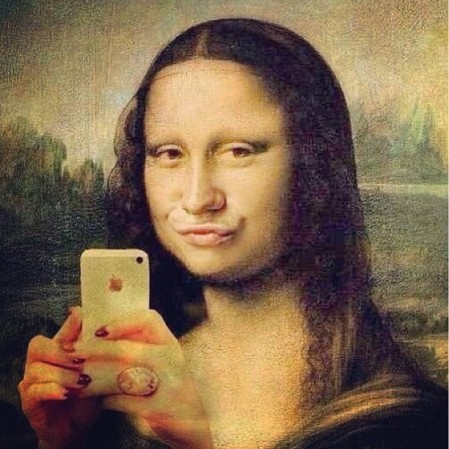 One genre of Instagramography that I think falls into this category is something I call the “microgram”, or “abstractagram”- close-up photos of the textures and details of everyday life. These images abstract and aestheticize the banal, making them potentially more interesting to a wide world who does not share any memory or experience with you. This kind of photograph I think also speaks to the power Instagram has the alter the way we see the world- to make us ask ourselves “Is this beautiful? Is this interesting?” far more often and perhaps more creatively than we otherwise would. 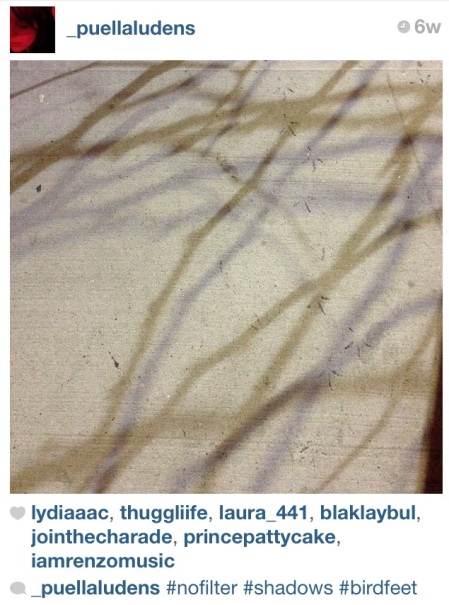 In a world where nearly everything is being documented by someone at any given time, it is easy to fall into a kind of photographic nihilism. I might suggest that actually part of the power of Instagram is that, unlike Facebook, it encourages a kind of scarcity of photography, a kind of more “curated” activity of sharing. Whereas Facebook allows me to upload my entire album of vacation photos all at once, Instagram only allows one upload at once- and as a mobile platform, it usually simply doesn’t make sense to sit there in the “real world” and upload image by image. Instagram values the singular, and this is something that is incredibly rare and difficult to attain in our world so very over-flooded by images of every kind. This is perhaps relatable to the popularity of the app “Snapchat”, which revolves entirely around an idea of scarcity: you cannot “upload” a photo, it must be taken NOW and sent NOW; the image or video clip only lasts for a maximum of 10 seconds and a minumum of 3; and it must be sent to separately selected individuals, rather than out to a mass, pre-existing network.

Instagram does not quite so heavily emphasize scarcity as Snapchat; it still in some ways endulges the idea of the photo “album”, in that individuals have “profiles” that collect individual posts and act as a kind of sleek visual journal. As Susan Sontag says, “Photographs are really experience captured, and the camera is the ideal arm of consciousness in its acquisitive mood.” There is much to be said here about the relationship between a consumerist culture and photography; iPhoneography seems undeniably to fuel the hunger to consume and horde the world, to turn even experience into a commodity. But it seems that Instagram is a platform that alters and even in some ways disrupts this “acquisitive mood”. By enforcing a kind of “curation” of content, the consumer is forced to consider the aesthetics and perhaps hidden beauty of his experiences. Furthermore, the particular social sphere of Instagram means that users do not simple consume- but also produce, share, and participate intimately in an community of Instagrammers.

Not to be overly sentimental; this curation of content and social sphere of Instagram encourages “selfies” of girls in bikinis at the beach just as much as it encourages photos of carefully considered shadows on a sidewalk or of the aftermath of Hurricane Sandy in a poor neighborhood. All things considered, it is impossible to say that there is any clear overall “effect” of this technology on the entire realm of photography or photographers. But Instagram does seem to offer some new alternatives and encourage new practices of photography, perhaps even slowly altering our understanding of the meaning of photography itself in 2013.

2 thoughts on “#Instalife: How Instagram redefines the meaning and practice of photography”

Error: Twitter did not respond. Please wait a few minutes and refresh this page.